More than 200 years after his death, Mozart’s enchanting final masterpiece still packs theatres all over the world. Light triumphs over darkness as we follow the young lovers on their perilous journey through a mysterious land of sorcerers and magic. Filled with ritual and Masonic symbolism, The Magic Flute is a playful but profound look at man’s search for love and his struggle to attain wisdom and virtue.

From the virtuosic arias of the Queen of the Night to the folksong-like melodies of the bird catcher, the full range of Mozart’s miraculous talent is on display in this captivating opera. With stunning costumes by Gabriella Ingram and a striking set by Gary McCann, The Magic Flute toured to 34 venues throughout the UK conducted by John Beswick.

THAT The Magic Flute is toured at all is unusual; that it is toured this well is remarkable.

Swansea City Opera have overcome its demand for technical complexity and a large cast – and the big budget this implies – to make a production of absolute integrity at modest cost…. And such singers! All were impeccable, with the well-matched techniques vital for this ensemble piece.

At the same time its lovers Tamino and Pamina – the principal ‘human’ (as distinct from ‘symbolic’) characters – have to develop convincingly. All was achieved.

But for me the most remarkable achievement was the arrangement, by musical director John Beswick, of Mozart’s score for just three woodwinds, a single violin and cello, plus keyboards.

Beswick’s ingenuity ensured that no orchestral nuance or tone colour was missed in music as diverse as Pamina’s Italianate arioso, The Queen of the Night’s coloratura, Papageno’s street songs and the Bachian counterpoint of ensembles and chorale melodies associated with Sarastro.

Graphics of the opera’s magical sequences were projected on to their doors, helping to separate two-dimensional symbolism from the flesh-and-blood humanism of the singers in front of them.

And such singers! All were impeccable, with the well-matched techniques vital for this ensemble piece. 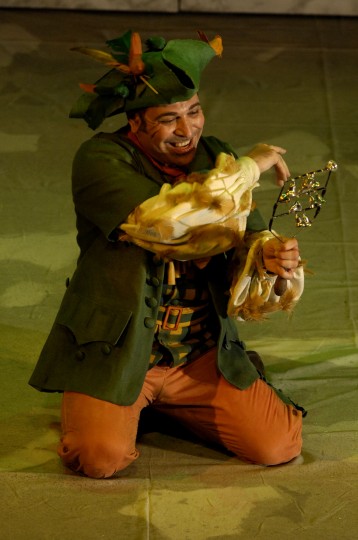