Così fan tutte contains some of Mozart’s most ravishing music. Supposedly based on a true story, this comic tale of deception, doubt, devotion and the twists and turns of romantic love, tells how a cynical old man, Don Alfonso, leads two naïve officers into a scandalous wager to prove it is against a woman’s nature to be faithful – ‘Così fan tutte’ – ‘all women are alike’. As the story unfolds we see just how well he succeeds; at first the women are resistant, but then attraction triumphs over virtue…

Set in the period of the early British Raj, our elegant production of Così fan tutte toured to 20 venues throughout the UK and was conducted by Fraser Goulding and designed by Gabriella Ingram.

Not the least of its attractions is that it is sung in English, in a sparkling translation that does full justice to the nuances and cadences of Lorenzo da Ponte’s original libretto……Swansea City Opera are to be congratulated for every aspect of this comic tour de force.

Then, there’s the clever transposition of the story to India and the days of the British Raj, bringing colour, a touch of the mystical and – in a practical sense – making the disguises a good deal more plausible.

All of this would, however, be as nothing without the superb cast – six fine performers, who frequently touch the sublime in putting over what is essentially a farce, if stripped down to the bare bones of plot. Andrew Mayor, recently outstanding in this company’s The Pearl Fishers, relishes the mischievous role of Don Alfonso, the hookah-smoking bachelor, harbouring an ill-disguised streak of comic misogynism. Though his plan to test the virtue of two ladies seems bizarre and rather unwholesome to the modern audience, it is straight out of the stock cupboard of eighteenth-century buffo escapades.

Certainly his wager with Ferrando and Guglielmo that they will witness the infidelity of their respective beloveds, Dorabella and Fiordiligi, if they obey his commands, seems fraught with dangerous complications. But then this is opera and all is fair that concerns the eternal struggle between the sexes.

Laura Meloy, of the lovely soprano, is a stately Fiordiligi, slower to succumb than her more frivolous sister, Dorabella, sung beautifully by mezzo, Gillian McIwraith. Iranian bass, Aris Nadirian, gives his usual flawless performance, in the role of the more boastful suitor, Guglielmo; while what Arthur Swan lacks in animation, as Ferrando, he more than makes up for in the nobility of his lyric tenor .

As is often the case in this opera, the maid Despina – a superb comic turn, portrayed by Alison Charlton-West, in the time-honoured fashion of the servant being more savvy than the master – just about steals the show.

The orchestra, under the baton of Fraser Goulding, accompanied the recitative with great sensitivity, no easy task when parlando humour is everywhere and everything. Swansea City Opera are to be congratulated for every aspect of this comic tour de force. 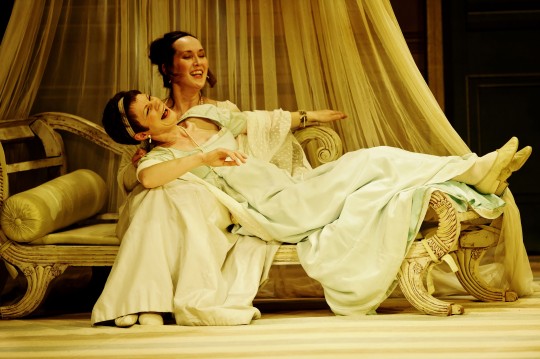